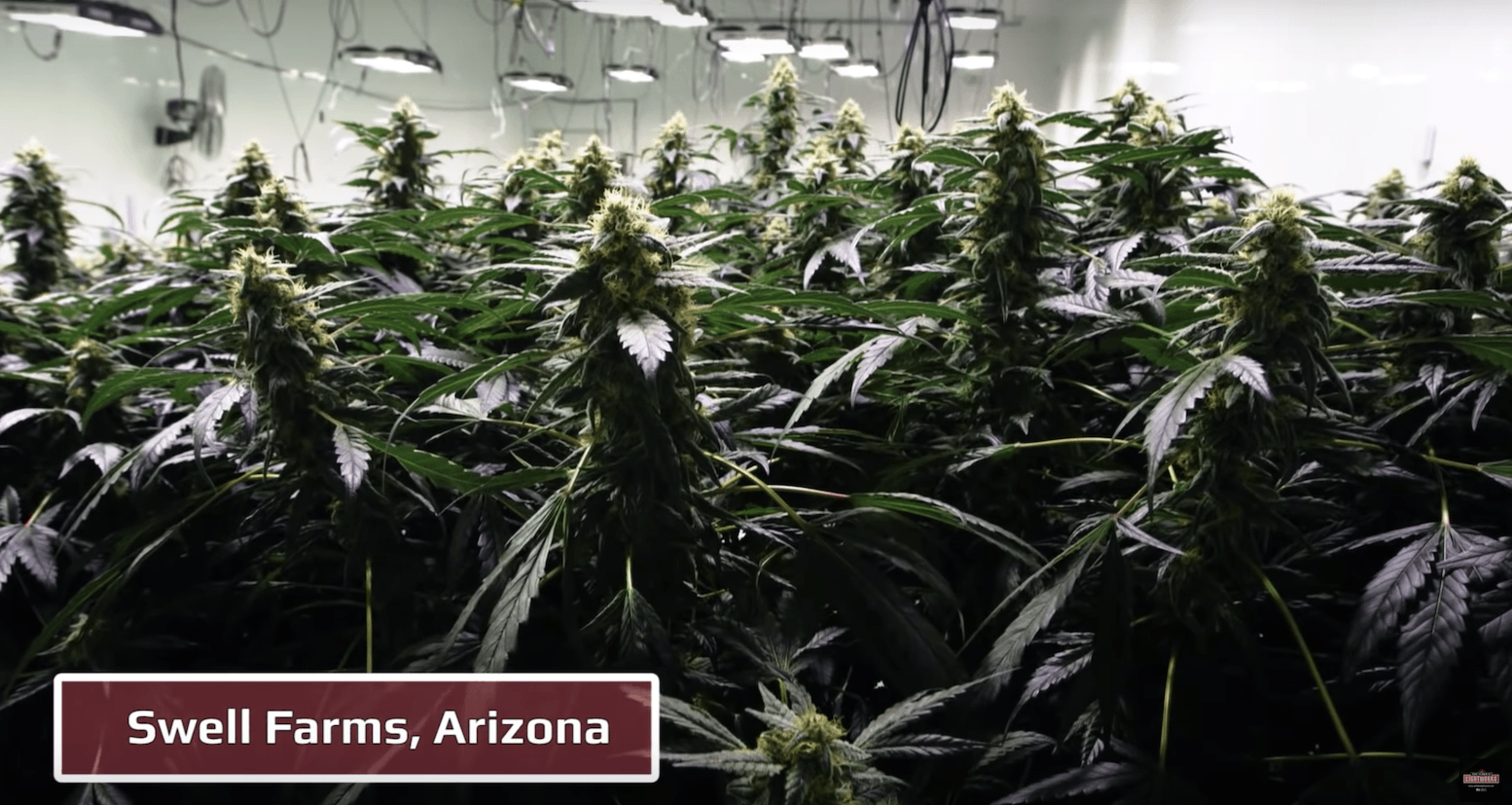 Regularly recognized by Leafly as the top dispensary in Arizona, Swell Farmacy is undeniably at the forefront of the cannabis industry. They know what quality looks like, and they know how to achieve it.

The products sold at Swell Farmacy locations originate from Swell Farms, an indoor commercial grow operation previously equipped with 1000w DE Gavita HPS lights. Under the expert guidance of general manager Tony and master grower Tyson, the team at Swell Farms has routinely turned out a quality crop. But like any competitive commercial grower, Swell Farmacy keeps their eyes open for opportunities to innovate and optimize.

Most recently, they experimented by swapping out their HPS lights for California LightWorks’ new SolarSystem 1100.

LED lighting is fast becoming an appealing option for commercial growers. The economic and environmental advantages of LED grow lights are increasingly well-known, as quality LEDs can promise as much as a 50% energy savings, a massive reduction in cooling costs, and a 50,000-hour lifespan with very little loss of light intensity. But like many expert growers, Tony and his team have their focus planted squarely on the end results.

“Our main motivation is the plant itself,” Tony says. “We’re wanting to make sure that we can provide a certain level of quality . . . if we can obtain that with all that could be provided—cost savings, time, etc.—then that’s all part of the bigger picture. But really, we want to see how the plant does with the lights.”

In pursuit of higher quality, Swell Farms chose to conduct their side-by-side, HPS-versus-LED experiment using the SolarSystem 1100. Here’s why:

A Closer Look at the SolarSystem 1100

The SolarSystem 1100 is the flagship model of our SolarSystem smart LED light series. The 1100 is our most powerful light, representing the greatest advancements in LED technology. Combined with the digital SolarSystem spectrum controller, the 1100 offers spectrum variability so growers like Swell Farms can customize light output according to growth phases and the needs of their plants. The SolarSystem Controller can be programmed to the minute for up to 365 days and features 0%-99% spectrum control over three spectrum channels: Blue, White, and Red. Growers who choose not to use the spectrum control function can opt for the always on mode, which gives a full blast that is comparable to HPS light and optimized for bloom.

This light replaces a 1000-watt HPS, but only draws an average of 650 watts. Technical features include:

The SolarSystem 1100 measures 18” x 18” x 4” and weighs 26 pounds. The coverage area in bloom ranges from 4’x4’ to 5’x5’. In vegetation, growers can gain a coverage area of up to 8’x8’ depending on the light intensity needed. These lights can also be hung higher in commercial operations for overlapping coverage.

The fixture is fully sealed both from the top and at the base to protect the light from humidity, water dripping, spraying, and splashing.

From technical engineering to functional design, the SolarSystem 1100 is the most versatile, powerful light California LightWorks has created. Miraculously, we even managed to offer these LED grow lights at a lower cost. On paper at least, it seems like an excellent bet for a serious grower hoping to optimize their product.

But let’s see how the SolarSystem 1100 performed against the Gavitas HPS lights that had already helped Swell Farms earn their reputation for top quality.

SolarSystem 1100 LED vs. HPS: The Results

Tony and his team tested the SolarSystem 1100 against the 1000 watt DE Gavita lights by swapping 20 of the HPS lights for 20 LEDs. They compared the lights on identical strains in side-by-side grow rooms. The rooms themselves were identical, and both the Gavita lights and the California LightWorks lights were hung for a coverage area of 5’ x 5’. The team at Swell Farms ran the same nutrients for both lighting conditions and conducted soil-to-nutrient comparisons.

With all conditions being equal, Swell Farms was able to achieve a clean, apples-to-apples comparison of the results. California LightWorks visited the facility two weeks before harvest to see how Swell Farms’ crops had fared under the glow of the SolarSystem 1100.

Here’s what we learned.

The one minor hiccup in the apples-to-apples comparison was that the strain of Girl Scout Cookies grown under HPS lights were a few days ahead of those in the LED-equipped grow room. But the LED plants didn’t seem to get the memo.

While master grower Tyson pointed out that the rooms equipped with Gavita lights were putting out slightly bigger trichome heads, he was more blown away by the structure and bud development of the Girl Scout Cookies under the SolarSystem 1100.

“The size of some of these colas, these lateral branches, these clusters we’re getting . . . we’re not even coming close to these with the Gavitas,” he said. He pointed out the node stacking and spears that were apparent only on the plants grown in the LED room. He credited the more nuanced light output of the SolarSystem 1100 for the difference.

“The Girl Scout Cookie is a plant that is sensitive to the extreme intensity of the HPS bulbs,” he explained. “With that Cali LightWorks [light] and the mixed spectrum a little higher above the canopy, we’re actually getting that awesome nug formation. We’re getting the nodes stacking closer with a better bud development than what we’re seeing out of these Gavitas.”

As for chemical profile, lab results showed the following differences:

“This plant is a frost monster,” Tyson explained of the Lemon Kush. He went on to say that they generally expect a smaller yield from this particular strain. Showing us the results in the HPS-furnished grow room, he pointed out the small growth, small stem size, and gaps between nodes. As a grow expert, he’s used to seeing results like this from Lemon Kush. But then he added, “Just to see what the LED room did to this strain is absolutely just so impressive that we’re not quite sure what to think about it.”

In the California LightWorks room, the difference was undeniable. Tyson pointed out the significantly larger growth—colas he described as “the size of soda cans.” He also noted the high production of cannabis terpenes. “In this LED room, it’s putting out just an incredible citrus kushy undertone,” he said.

So how did the lab results look for this strain?

“White Widow is a true indica that stays really squat with a single topping,” Tyson explained, presenting the plants in the LED grow room. He looked admiringly at the results of nourishing this shorter plant with spectrum-variable lighting. He pointed out the tight nodes, tighter than those in the HPS room.

As for chemical profile, the gold once again goes to the SolarSpectrum 1100.

The fourth strain tested was Bruce Banner. The lab results there will come as no surprise.

Let’s zoom out a moment from each specific strain and take a look at what switching to California LightWorks LEDs has meant for Swell Farms’ production as a whole.

As for overall chemical profile:

“The density and the spacing of the nodes are tight and the flowers have come out quite dense, and at this point, things are looking really good in comparison to Gavita.”

We at California LightWorks are so glad we could help another expert grower enhance an already excellent product.

If you’d like to see similar results for your grow operation, we’ll be happy to speak with you about the SolarSystem 1100, the SolarSystem Controller, and any other product in our commercial, greenhouse, and personal grow light collections. Just drop us a line and let us know how we can help.