What is a Full Spectrum COB LED Grow Light? 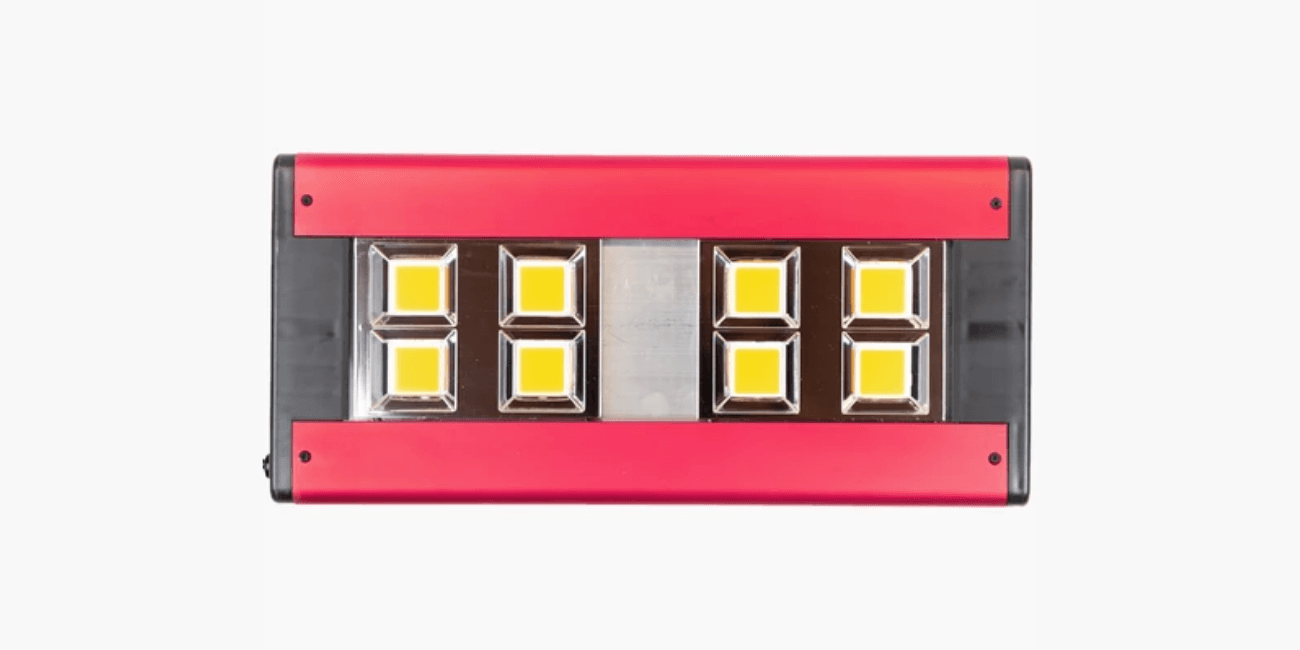 Here’s everything you need to know about full spectrum COB LED grow lights. We’ll explain what this new design means for LED technology and whether it’s worth it to make the switch for your own indoor cultivation.

But first, the basics.

What is a COB LED Grow Light?

Until very recently, surface mounted diode LEDs have been the go-to technology for LED grow lights. This technology—commonly referred to as SMD—involves single diodes mounted to a surface individually. They may be mounted close together, but they always function as several separate light sources.

COB technology – an abbreviation of “chip-on-board”- promotes an even light spread, creates a uniform light source, and reduces costs. COB LEDs are built by mounting many tiny LEDs directly onto a substrate in close proximity. Together, these miniscule diodes create one single module—a uniform light source essentially operating as one big LED chip. COB LEDs will typically send light out in all directions (180 degrees) rather than in specific narrow angles typical with SMD LEDs.

It is possible to adjust the color temperature of the light by adjusting the phosphor mix. Thus, it is possible to move the spectrum more towards the red or blue spectrum for veg or bloom, but this will be a fixed spectrum and does not change. There is also a limit in how far you can push the phosphor to red or blue. Some surface mount LED fixtures, such as the SolarSystem series from California Lightworks, allow for variable light spectrum in a single fixture – giving you the best of various light settings.

What are the Advantages of COB LEDS vs. SMD LEDs?

Now that you have an idea of what COB LEDs are, the question that follows is: why does this technology exist in the first place? How does COB technology improve upon the benefits of SMD LEDs?

One rather significant advantage is an increase in concentrated light energy. SMD LED grow lights are already far more efficient than their HID counterparts but it is difficult to pack a lot of light power into a small space. The LED boards must be larger at higher power levels. Now, chip-on-board technology pushes that power density even further. COB construction allows a single driver to power multiple chips. The result is more light output per square inch. COB LEDs also produce less heat. COB LEDs have proven very effective in flood lights and light bulbs where SMD LEDs would not fit into a small space at higher power levels.

Light density increases significantly as there are more diodes packed together in a tight space. And because these many diodes function as one large LED chip, they generate a greater intensity of light that penetrates deeper into the canopy. COB technology also boasts a higher color rendering index, which means human eyes perceive objects under the glow of a COB LED grow light as their natural color. Without the purple glow associated with SMD LED lights, growers have an easier time identifying discoloration that could indicate a fungal attack, light burn, or any other threat to plant health.

Perhaps one of the most significant benefits of COB LED technology, however, is the quality of the light spectrum.

The Benefits of a Full Spectrum COB LED Grow Light

Full spectrum COB LED grow lights are carefully engineered to provide the complete spectrum of visible light needed by plants to carry out their biological processes. Your plants need various wavelengths of light throughout the grow cycle, as each color spectrum signals the plant to perform a different function related to growth and development. Blue light promotes root development and stocky growth. Red light encourages budding and promotes high yields in the flowering phase.

Even green light has a role to play. While plants absorb only miniscule amounts of green light for photosynthesis, chlorophyll reflects green light, allowing light to penetrate deeper into the canopy as it bounces off the top of one leaf and onto the underside of another.

Full spectrum COB LED grow lights are designed to accommodate for the exact needs of your crop with a tailored light spectrum. No color spectrum is used in excess, and no essential wavelength is excluded.

The main limitation of COB LEDs is that they are fixed spectrum. There is no possibility of changing the spectrum mix as you can with traditional SMD LEDs. The spectrum of a COB LED is formulated by mixing a custom blend of phosphor that is used as a coating over the COB LED. This phosphor mix then emits light. It is possible to change the spectrum a little by changing the phosphor mix – but this will be fixed to that spectrum. Traditional SMD LEDs can be mixed to get a specific spectrum and to change them by raising or dimming the different colors.

While chip-on-board technology is still fairly new in the world of grow lights, this innovative approach to lighting is off to a running start. As you research your grow light options, you’ll likely notice the increasing prevalence of COB LEDs.

Just be sure you research any manufacturer thoroughly, as not all LEDs are created equal. You want to ensure you’re getting the very best quality and have easy access to customer support.

If you’re not sure where to start, we recommend checking out the SolarXtreme Series by California LightWorks. These lights all feature our exclusive Optigrow light spectrum developed to serve your plants through all phases of the grow cycle. And of course, these lights use premium COB LED technology to ensure full power and maximum efficiency. They also feature a new direct AC technology which greatly reduces the cost of the LED fixtures.

Let us know if you have any questions about the SolarXtreme Series or the benefits of chip-on-board technology. We’re proud to be a resource for dedicated growers.