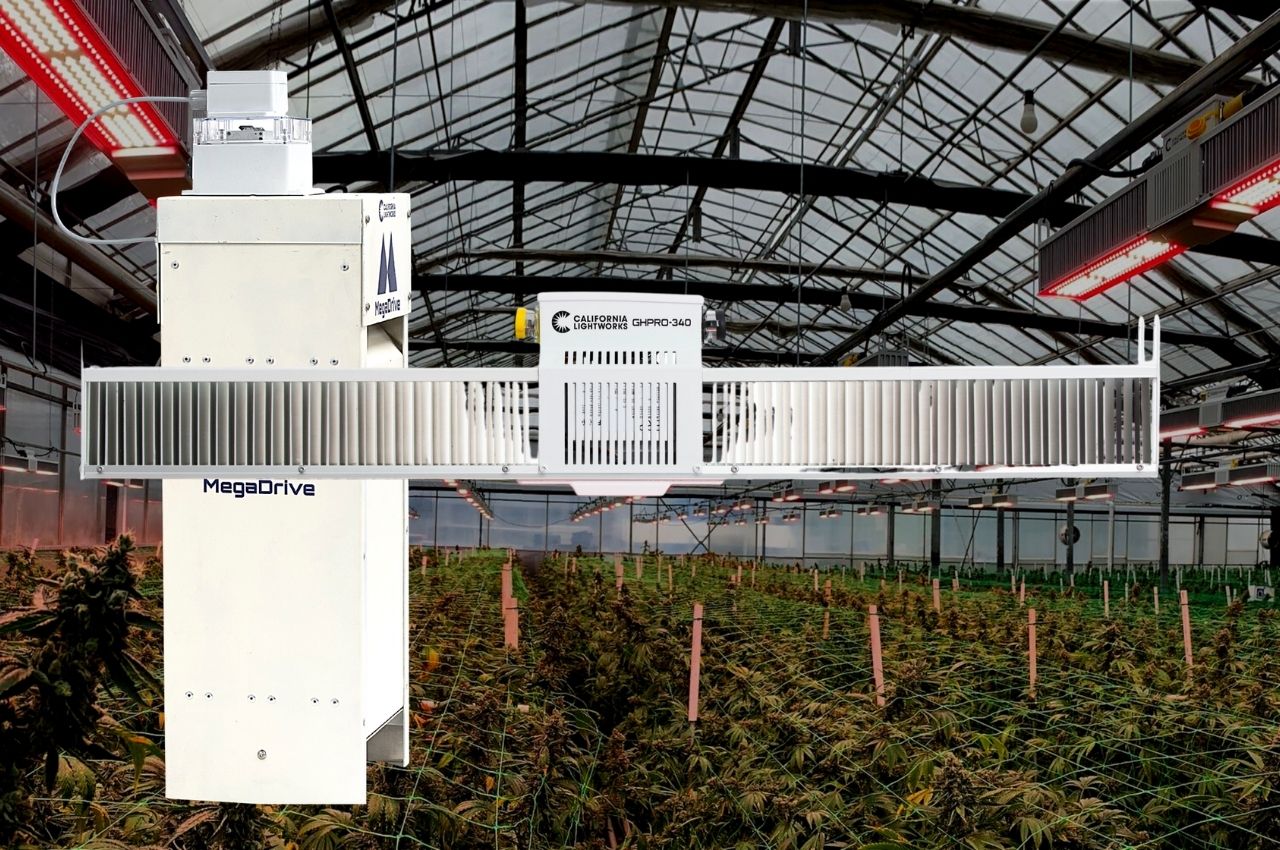 Supplemental lighting is a key component of any greenhouse, and our goal at California Lightworks is to provide customers with the most efficient lighting systems possible. That’s why we’re so excited to introduce our MegaDrive™ Greenhouse Lighting Technology. The MegaDrive is a smart LED greenhouse lighting system that consists of a 10-kilowatt central power supply and a series of 400-watt fixtures. This patented new technology is designed to reduce both upfront costs and operating costs while providing dynamic spectrum control and sunlight balancing.

We’re confident this innovation will lead to fundamental changes in greenhouse technology – and we’re excited to tell you all about it.

MegaDrive™ Greenhouse Lighting Technology comes with 400-watt LED fixtures with dual spectrum control and separate channels for red and white, which can be dimmed from zero to 100%, either manually or automatically.

The fixtures also feature Bluetooth control, meaning they can be controlled from any Bluetooth device, whether that’s a laptop, a tablet, or a smartphone. The cloud-based data communication system allows you to control functions from virtually anywhere in the world.

Every LED fixture is water resistant with no electronic parts in the unit other than the LEDs. This means fixtures are lightweight and you can daisy chain up to 30 over your canopy with no power drops.

The fixtures are among the most efficient LED lights on the market. With up to 3.2 micromoles per joule and a power wattage of up to 400 watts, they get generate an average of 1100 PPF despite being small, low profile fixtures.

The heart of the MegaDrive™ Greenhouse Lighting Technology is the MegaDrive – a revolutionary central power system.

We have removed drivers from the individual LEDs and consolidated them into a 10,000watt single power supply; it takes incoming 480 volts through an independent breaker to power up to 30 400-watt LED fixtures.

The MegaDrive can be mounted on the wall near your incoming power source. This means no more electrical wiring over your canopy and also cuts down on the cost of approvals and permits. All you need is a permit for the incoming plug of 480 volts.

The MegaDrive comes with a wireless Bluetooth system that integrates with most popular environmental controllers. You can run all your controls through existing controllers or run controls independently on each zone of 30 lights through any Bluetooth device.

You can adjust your spectrum control anywhere and balance sunlight by zone. This gives you maximum control with the least amount of infrastructure for wiring, electrical outputs, or data cables.

We are confident this system will be a game changer in greenhouse technology. Not only is it easy to use and incredibly energy efficient, the cost savings are unmatched.

MegaDrive™ Greenhouse Lighting Technology has the potential to reduce installation costs by up to 80% and fixture cost by up to 30%. Operating costs are also 50% lower than HPS grow lights.

While this system is primarily meant for greenhouse use, MegaDrive™ Greenhouse Lighting Technology can also be used to grow indoors, allowing growers at all levels the ability to achieve quality yields with lower upfront costs.

We are confident we have created something special with MegaDrive™ Greenhouse Lighting Technology. You can request a quote for more information if you’re interested in getting started. We are happy to answer any questions you have.

At California Lightworks, we are always here for our customers. If you’d like to learn more about MegaDrive™ Greenhouse Lighting Technology – or any of our other products – contact us any time.