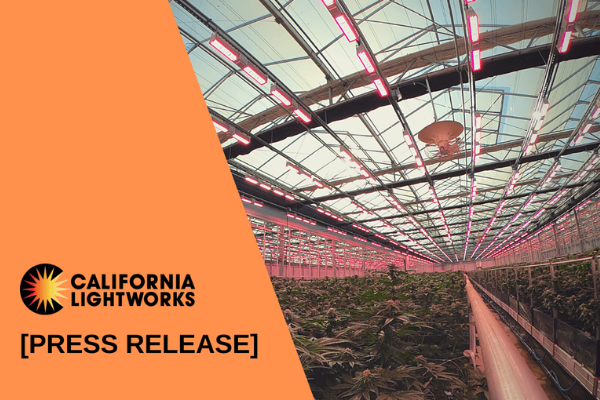 “The challenges presented by climate, regulatory policy and the economics of cannabis cultivation drive the demand for cutting-edge technology and best practices,” said Brett Vapnek, of Nipomo AG. “We knew we had to get the best lighting technology installed so that we could increase our yields and revenue, while cutting costs and reducing our climate impact.”

Nipomo AG installed the California Lightworks’ MegaDrive® LED Lighting system in their San Luis Obispo facility that has four bays for flowering, and two bays veg and mothers. The MegaDrive is a patented cost-effective LED lighting system for greenhouse operations that is simple to install yet highly effective in increasing both crop quality and yield.

Other lighting solutions require power drops throughout the greenhouse that can cost hundreds of thousands of dollars. One of the unique challenges of the Nipomo Ag installation was that in addition, they would have had to run new power lines to both ends of the 270 ft. greenhouse. The cost of bringing heavy power to the far side of the greenhouse alone was estimated to well over $100,000.

However, the MegaDrive’s unique central power supply did not require any power line runs anywhere over the canopy. Instead, the MegaDrive systems were installed across one wall of the greenhouse closest to the power transformer and connected directly to three phase 480V, reducing installation cost by over 80%.

“The MegaDrive installations are great because you can have the system that powers and controls the lights, installed away from the grow area, even up to 300 feet from the light fixtures” added California Lightworks CEO George Mekhtarian. “The system is also able to be carefully turned for spectrum and intensity, saving energy and increasing yields. The lighting can simulate sunrise and sunset, and the lighting intensity can be dialed up and down as necessary automatically via a photo sensor. With the MegaDrive central power supply design, all the power electronics are removed from the fixtures and the lights become very robust and ideal for high humidity environments.”

California has issued a large number of cannabis cultivation licenses, increasing competitive pressure. Cannabis prices have come down significantly in the past two years. Greenhouse production costs are generally lower than indoor grows, but the quality also tends to be lower. In addition, yields in a greenhouse during the winter season are less than half of the yield in the summer. This makes it a challenge for greenhouse operations in California to stay profitable year-round. High efficiency supplemental lighting is a must-have in order to compete and win.

Compared to the grow operations outfitted with traditional high-pressure sodium (HPS) lights or no lights at all, California Lightworks’ MegaDrive increases the yield (both in terms of pounds per square foot and pounds per watt) and quality of the crop. MegaDrive LED technology reduces fixture costs by up to 30% and installation costs by up to 80%. In addition, these benefits come at a 50% lower operating cost than traditional HPS lighting systems.

The MegaDrive spectrum and dimming controls can be integrated with third party greenhouse environmental control systems or done independently using unique touch screen and wireless solutions.  Every aspect of the yield can thus be dialed in. In addition, the system’s slim linear light design and central power supply reduce shadowing.

Greenhouses are notorious for power quality issues and lightning spikes. The MegaDrive LED system has the industry’s most robust transient protection making them extremely reliable.

The installation of California Lightwork’s MegaDrive LED system is helping to keep Nipomo AG at the forefront of California’s booming cannabis industry.

Since 2008 California Lightworks has been a pioneer in advanced technology LED lighting for horticulture. All products are designed, manufactured and supported in our Southern California factory and we stand behind every product we have ever made. From small scale home grow to large scale indoor and greenhouse applications, we offer optimal lighting solutions. California Lightworks has reduced carbon emissions by 465,813 metric tons.