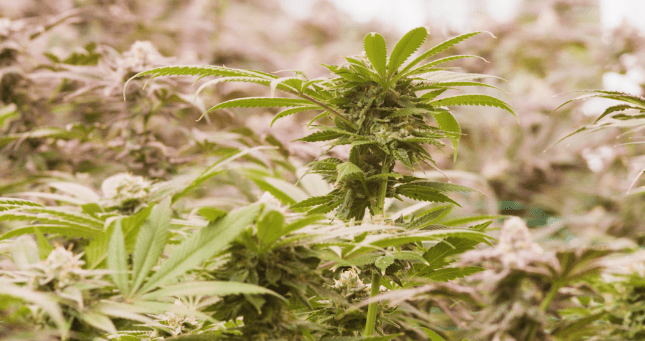 Growing with “white light” is a trend that’s been rising of late, at least in grower-targeted marketing, with proponents insisting that white light grows better crops than a traditional LED set-up, largely balanced between red and blue light. But what exactly is white light? And is there any legitimacy to the theory? The latter’s answer takes a bit of time to explain, but in the face of recently published studies, is tilting definitively towards no.

The Basics of Growth Spectrum

When it comes to growing, there are four general spectrums worth noting:

Purple light occurs as a combination of red and blue light. Finally, white light is the result of adding green to the already-blended purple spectrum. In other words, white light is a combination of all colors but far-red. When it comes to the process of photosynthesis, far-red is the only hue that’s absorbed with slightly less efficiency than the other three, so by some theorists’ logic, white must be the ideal light for growing. After all, it contains all three colors of light most readily absorbed by plants. But absorption and growth are two very different things.

When looking into the effectiveness of white light on growth, it’s important to focus on the only element that really matters here – the addition of the green light itself to the already-proven purple power combo. While it’s true that green, red and blue are all absorbed into the plant, things immediately get more nuanced from there.

In 1972, K.J. McCree studied the photosynthetic effect of broad-spectrum lighting on an extensive selection of plants – crafting what’s now commonly known as The McCree Curve. The Curve illustrates that – with all colors stacked together – green is actually less efficient than blue or red when it comes to photosynthesis. Many researchers have continued to test McCree’s results in altered experiments, only to come away with similar conclusions (most recently in Paridiso and Hogewoning’s 2011 and 2012 findings).

And before jumping into broader topics – it’s not just photosynthesis where green light’s power seems to trail. When it comes to plants’ total overall growth, green light has also been found deficient, by nearly any relevant measurement. Recent studies have proven that green light contributes to less size and less weight in a variety of crops it’s used on – from lettuce to flower.

However, a recent study by LED lighting company Signify took a closer look at the phenomenon by measuring light levels in both a rose and tomato garden. In both cases, PAR levels mostly decrease as you go lower into the canopy. However, green PAR light stayed relatively stable at different heights, meaning it is not better absorbed by the canopy and does not penetrate the crop deeper.

In a recent study, M.C. Snowden compared seven different species of plants in eight different hue environments, adjusting green light in increments between 0% and 30%. Across all compositions and across all species, Snowden found green light produces minor-at-best assistance in plant growth, with relatively no benefit to be found between low-level and high- level uses of green.

In fact, it’s also worth noting that in many crops – specifically fruit and flower, green light can go from being a relatively minor boost to growth in small doses, to an actual hindrance in larger quantities. Lighting set-ups dominated by green light tend to yield a far less potent flower result, with less active compounds. To say it a different way: different crops excel under different lighting conditions, but when it comes to the effectiveness of green light, less is more from nearly any angle.

So the myth of white light’s miracle growth is revealed to be exactly that – a myth – in most recorded cases. Photosynthesis, growth, size, weight and potency are nearly all more successful under red and purple light-dominant set-ups. In fact, for white light to be of any substantial benefit, nearly all studies conclude the amount of green included should be very small.

So why do these findings matter, and more importantly – in light of these findings, why would growers ever invest in green light to begin with, when they could simply stick to the more- effective purple spectrum?

Red LEDs may produce the strongest results, but those results come at a price – significantly greater diode cost than blue and green LEDs. However, red diodes are also more energy efficient than blue or green diodes, meaning they use less energy. This leads to a lower energy bill in the long run. Although having green in the spectrum can be helpful, given the research already cited, only a small amount of green light is necessary to be visible in the actual yield.

In a recent head-to-head comparison of our heavy red/blue spectrum vs. many “white light” competitors, Grow Ohio found that our fixtures delivered the highest yield and quality by a significant margin, Click here to watch the full video.

Anyone (or any company) claiming you can turbo-charge your growth through white light is likely to underwhelm, when all is said and done. There’s definitely a place for green light in any smart set-up to make the plants more pleasant to the human eye, but it’s a place that never relies on that green to do too much of the work.